We are excited to move into our second week of DigLits with you all and hope you found the first class session and readings thought-provoking; we know we were already impressed by your backgrounds and the discussions you engaged in, both in-person and digitally!

Last week, we started to think about mediation, and after reading an excerpt from Bolter and Grusin (1999), we talked about the importance of mediation’s historical background—the idea that mediation is not new and/or not just about the digital: “Both new and old media are invoking the twin logics of immediacy and hypermediacy in their efforts to remake themselves and each other” (p. 5). Mediation and remediation are constant and non-linear; all mediation is remediation, and mediums need other mediums. This historical tracing was found in the three readings for Week 2 as well, particularly in the readings’ emphasis on how people’s practices evolve over time and in relation to other phenomena.

Lankshear and Knobel (2011) provide a broader overview of the field of literacy from its beginnings in reading and writing to its current concepts of “new” literacies (p. 27). Similarly, Buckingham (2006) speaks to the historical background of digital literacy; ideas about digital literacy as well as about multiple literacies have been circulating since the 1980s (p. 265). Like Hicks and Turner (2013), Buckingham (2006) tells us that we need to move beyond a definition of digital literacy that is only technical and informational (p. 264).

When talking about “new” literacies, Lankshear and Knobel (2011) make the distinction between newness in terms of paradigm (psychological versus sociological, p. 12) and newness in terms of ontology (pp. 27-31). In regards to ontological newness, new literacies are made up of more literal and/or tangible changes (as in technology) as well as of changes in priorities and values, and they call the latter “ethos stuff” (pp. 28-29). Lankshear and Knobel (2011) are careful, however, to point out that the technically new aspects and the new “ethos stuff” are dependent on each other (p. 29). 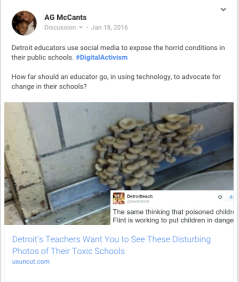 and promote digital literacy in their classrooms (p. 62-64). For example, as Ah-Keisha posted in this week’s G+ discussion, there is a collective of Detroit teachers tweeting about their horrid school conditions, and this serves as a point of “digital activism.” Hicks and Turner (2013) would say, “be an advocate” (p. 63), and using Twitter to expose the unacceptable conditions that students and staff are experiencing forces people to take notice and hopefully make changes to rectify this issue and make their learning/working spaces safer.

Many of the G+ challenge responses help us to also return to the notion of tensions that started our class discussion in Week 1 and that remain throughout this week’s readings—technology as an add-on versus a genuine opportunity, functional versus critical notions of literacy, paradigmatically versus ontologically new, and others. In the “Reflection and Discussion” questions at the close of their chapter (p. 30), Lankshear and Knobel (2011) ask readers to reflect on what types of literacy-based digital activities are truly “new.” How might we respond to this question when considering the first example of transmediation posted in our G+ community, that of a crossword puzzle shared by AG McCants? How does this crossword puzzle speak to mediation and remediation and ideas of “new” as discussed by Lankshear and Knobel (2011)?

In these readings, it was argued that digital technology be used critically in a way that allows students to create something totally new and of their own, just like what Megan and Joyce were able to do with their G+ challenges. Joyce created an Instagram tic-tac-toe quiz using multiple mediums to display one large picture with a message by creating and arranging smaller photos together. Megan was able to use technology to create an elaborate visual representation of her analysis and summation of Lankshear and Knobel’s (2011) article.